For many teachers and students alike, the Holocaust is one of the most memorable and powerful historical units of the school year. As teachers, the way that we approach this unit is incredibly important. For those of us who teach it, why do we? And how can we use it as a springboard to talk about issues of justice and injustice in the United States? How can we teach our students to recognize the systemic bias and hate that enabled the Holocaust to happen?

The German people did not wake up one morning with a decision to hate the Jewish people. It was a anti-semetic movement that built upon systemic discrimination, little by little, until it ended in genocide. Through my own unit on the Holocaust, that’s what I hope for my students to understand: how to recognize and respond to both individual and systemic injustice. Here is a broad overview of how we learn about the Holocaust in Ms. Green’s class.

I open this unit with a read aloud of Benno and the Night of Broken Glass, by Meg Wiviott. This book tells the a story of the beginning of the Holocaust through the eyes of Benno the cat. In the beginning of the story, Benno is spends time with all of the people in his block in Berlin. As the story goes on, we see how things gradually shift in Benno’s neighborhood as anti-Semitic laws build, and how his Jewish friends begin to disappear. The story ends with Kristallnacht, the Night of Broken Glass, which historians point to as the beginning of the Holocaust. The book only takes about ten minutes to read aloud, and ends with a really informative and kid friendly author’s note about the history of Kristallnacht. After reading this story, my students are always full of questions, which becomes a great lead in into the rest of the unit.

The second read aloud that I always make sure to use is Terrible Things, by Eve Bunting. This allegory (great bridge to talking about folktales and figurative language) is based off of the quote by Martin Niemöller, the German pastor. I always discuss the original quote with students after reading the story.

First they came for the socialists, and I did not speak out—because I was not a socialist.

Then they came for the Jews, and I did not speak out—because I was not a Jew.

Then they came for me—and there was no one left to speak for me.

After our read aloud, we take some notes in our interactive notebooks. Click here for our fill in the blank vocabulary.

We end up using three interactive notebook pages (at least!) in this unit, so this is just our first.

This activity is about the 87 anti-Semitic decrees made in Berlin, Germany, from the years 1933-1945. The laws are each printed on little slips of paper, and I pass them out to all of my students (each student receives about 3-5 slips of paper).

There are two ways that I have conducted this lesson after passing out the laws:

Either way, this is one of the most valuable activities we do all year. The activity is available for free here, thanks to the Holocaust Museum Houston and the Warren Fellowship for Future Educators.

The Pyramid of Hate 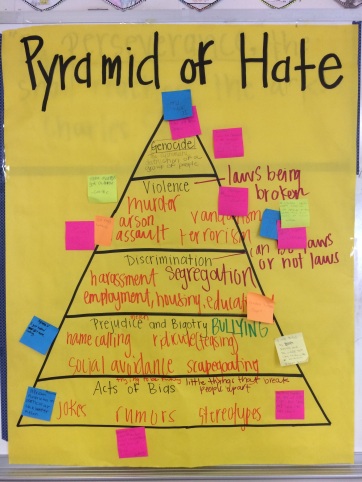 After looking at the laws and decrees passed in Germany, students are quick to note the way acts of hate built on themselves. I then introduce the Pyramid of Hate, which gives us a tool to analyze these acts. We discuss the way that these acts of hate build during the Holocaust, and then use this as a bridge to discuss where we see these acts of hate happening in our community/country/world today. Students interact with our anchor chart of this pyramid, and students glue their own copy into their interactive notebooks and write their own reflection.

You can read more lesson plans about the Pyramid of Hate from the anti-defamation league here.

As always, I want to end my units with a focus on resistance. For this unit, we read The Whispering Town, by Jennifer Elvgren. This book is a great follow up to Terrible Things, which leaves us with the question “what if they had worked together?” In the story of The Whispering Town, they do! After reading The Whispering Town, I told students that they would be learning about people who resisted in all different kinds of ways. We wrap up the unit with this meet and greet, in which students learn about all of the myriad ways to resist injustice.

That’s it! One to two weeks on the Holocaust, focusing on recognizing and responding to injustice. Much thanks to the Holocaust Museum Houston, who gave me exposure to so many of these resources and pedagogies during my time at the Warren Fellowship in 2015.