Hello from afar to all of my Green Beans! I miss you dearly and wish we could be doing this learning face to face.

For as long as we’re in our shelter in place orders, you can expect to find all of your social studies and ELA lessons here. Each week, I will post a new exploration for you. Depending on how long these orders are in place, you can expect to find explorations about: child labor, the American Revolution, slavery and abolition, colonization, and indigenous peoples. For each exploration, you’re always going to need to have a notebook and a pencil with you. You might also want to keep some sticky notes on hand, if you have them.

At the end of every week, you will turn in your work by taking photos of your notebook pages and submitting the photos via Google Classroom by Friday at 3:00pm. The explorations are designed to be worked on a little bit each day for five days. However, you can spread out the work however you want to. Each section will have a suggestion for when you should do this work, but those are just suggestions. My only recommendation is that if you’re going to keep going through multiple days of work, stand up and take a break for a little bit in between sections.

Before spring break (aka before Covid-19 turned our lives upside down!), we were learning about the Industrial Revolution and child labor. This week, we’re going to wrap up our study of child labor. So, let’s get started!

Monday: What was the Industrial Revolution, and what is its relationship to child labor?

First: what do you remember learning about the Industrial Revolution and child labor so far? Take five minutes to write down everything you remember from the beginning of our unit. Do not go on with this exploration until you’ve done this initial stop and jot.

Hopefully you remember some causes and effects. If you’re having a hard time thinking back to the start of our unit, or if you need a refresher, you can watch this Flocabulary video and  read this Newsela article.

Here’s the big idea: lots of new inventions led to a time period that we call the Industrial Revolution from roughly 1760-1840. Lots of new technology led to new inventions, which led to changes in the way things were produced, which led to more factories, which led to more people being needed to work in those factories. In true American style, we recruited the most vulnerable people to fill the most dangerous jobs: poor children, immigrants, and women (sometimes, people had all four of these identities! Poor young immigrant women!). And, you guessed it, we didn’t pay them very much money or provide them with many, or sometimes any, of the protections needed to do their jobs safely. While historians say that the Industrial Revolution “ended” in 1840, the effects of this time period were long lasting. Child labor was not federally outlawed in the United States until 1938. 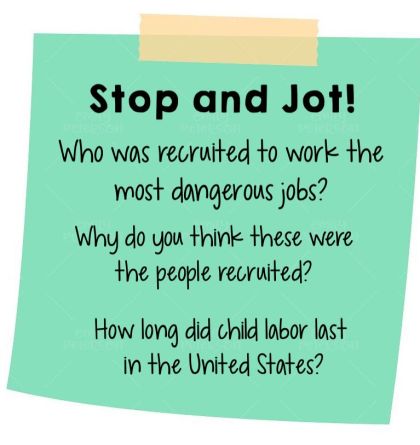 Tuesday: What kinds of jobs did boys have? 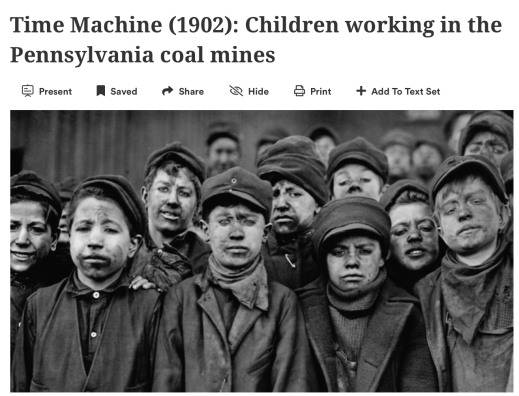 Read this Newsela article about the young boys who worked in coal mines. As you read, respond to the annotations in the margins. Take the quiz when you are finished. You must be signed into your Newsela account for these links to open properly!

Wednesday: What kinds of jobs did girls have?

Another kind of job that children had was working in the textile mills. Textile mills are factories where clothing is made. While working in the coal mines was largely seen as boys’ work, these jobs were reserved mostly for young girls. To attract young girls from across the country, these factory owners would build boarding houses right next to the factories. Young girls would leave their homes and families to come live in the boarding houses and work in the textile mills.

Read this Newsela article, “Dear Mama: Letters from a Mill Girl.” Create your own annotations and take the quiz when you’re done.

Thursday: What did people do to fight back against child labor?

Like every other time of injustice during United States history, there were always people pushing back against unfairness and fighting for justice. Who do you think might have been the most opposed to child labor?

You guessed it…the children themselves! Children did not agree with what was happening to them, and many children found ways to rebel against the unfair treatment. There were many brave children who even organized and went on strike! 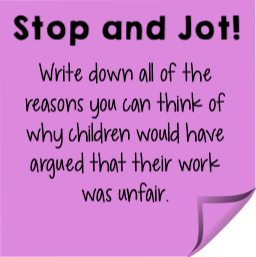 While the workers were doing their part to push back, there were adults doing their part as well. One grown up in particular staunchly agreed with these children and decided to join in on the fight. That man’s name was Lewis Hine, and he was a photographer working for the National Child Labor Committee (NCLC).

Watch the video about Lewis Hine, and then respond to the questions afterwards. You can also work on answering these questions as you watch the video, if you wasn’t to do them at the same time.

OPTIONS! Choose one of the following activities. Be sure to write down in your notebook which activity you are choosing.

Friday: What protections do children have today? (optional: school holiday)

Read the official Declaration of Dependence with an adult. It’s pretty short, but the language is also pretty intense. Read it together, and then rewrite the declaration in your own words. Your declaration should have three articles (the place where it says “resolved”), like the original.

That’s it! Remember to turn in your work on Google Classroom before 3:00pm on Friday. Let me know if you need anything!

Are you suuuuuper interested in child labor? Want to keep learning? Here are some more things you can do!